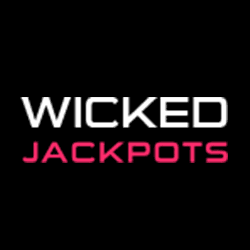 Nothing says ‘wicked’ like the colour pink, this is something that is known throughout the world, or possibly not, but we’ll get to that.

Regardless, Wicked Jackpots is an online casino that is very confident in its own abilities, advertising itself as “The #1 Online Casino in the UK”.

Of course, as is almost always the case with casinos that make such boasts, there is nothing to substantiate this claim at all, we just have Wicked Jackpots’ word on their quality compared to other UK facing sites, and it’s fair to say that they’re probably more than a little biased!

So, what does Wicked Jackpots bring to make players understand why it is the UK’s #1, if it is (spoiler alert: it isn’t).

Now, onto this colour scheme issue. If Wicked Casino is using the word ‘wicked’ in the way that 90s slang did, then it is immensely outdated, the safe assumption is that ‘wicked’ here is used to mean somewhere between naughty and evil.

If that is the case, then a blue and pink colour scheme with splashes of white, a logo that includes one of the simplest and less impressive fonts you’ve ever seen, and a few moody looking models holding playing cards does very little to bring the concept to life.

It isn’t that Wicked Jackpots looks bad, it’s that it would be more interesting if it did, unattractive is probably preferable to boring, but Wicked Jackpots unfortunately is better defined by the latter.

The basic design concept and layout is probably supposed to give a sophisticated and professional look, but we’ve seen it done better so many times that the effect is limited.

With a disappointing look, there’s a lot for the games to do at Wicked Jackpots, and perhaps unsurprisingly, it doesn’t do so.

While slots, table games, and live dealer options can all be found here, when compared to the majority of popular online casinos, Wicked Jackpots’ collection rapidly fades into the background.

Players expect choice, and range, and they have been spoilt to the point that those expectations are now entirely acceptable, but it doesn’t appear like Wicked Jackpots got that memo.

For an online casino that is this distinctly average to describe itself as the UK’s #1 is frankly laughable, the design work is boring, there are not close to enough games, in fact, the only thing that looks tempting is the welcome bonus, but you’ll find better options than that elsewhere too.